Home/City Lawyer in Crusade over Firms Liability Protection
Previous Next

A Cape Town lawyer has launched a crusade against firms which make consumers sign contracts absolving the companies of legal responsibility if something goes wrong.

This includes gymnasiums, hospitals and security companies which insist their clients sign these waivers, leaving people with no legal recourse if they suffer injury or other damages through an organisation’s negligence.

Malcolm Lyons, an attorney specializing in Personal Injury and labour law, says the Virgin Active contract contains a clause stating the gym chain has “no liability and indemnity”. Such clauses are unenforceable in the United Kingdom and America, he says.

However, Virgin Active insists the disclaimer clause is standard practice.

The clause says that Virgin Active, its directors, employees, contractors, consultants or other members are indemnified even if they are found guilty of gross negligence or intentional
misconduct, including theft.

Lyons believes the clauses amount to unfair business practice and may contravene the Consumer Affairs Act.

“If members sign the clause, they waive all their rights. If a staff member drops a weight on your head you can’t sue for damages. If you fly off a faulty machine and injure yourself, tough.”

Lyons says even if a staff member were caught stealing, the club would not be liable.

He says the clauses indemnify Virgin Active from any wrongdoing of whatever nature.

It appears that the intention of Virgin Active is to render its members completely impotent to claim from them should there be flagrant misconduct of its employees and others.”

Lyons says Virgin Active refused to renew his membership because he deleted two clauses in the contract relating to no liability and indemnity. He has since written to British entrepreneur Richard Branson, owner of the Virgin Group, to voice his concerns about the unfair clauses in the South African contracts.

His letter was referred to the managing director of Virgin South Africa, Hans Hawinkels, and the response from the company’s legal advisers was that they were satisfied the clause did not contravene the Consumer Affairs Act.

Lyons was told his membership had not been rejected.

“You refused to contract with ourselves as per our terms and conditions incorporated in our membership agreement,” it said.

Lyons has also contacted the Competition Commissioner and the Consumer Affairs Committee of the Department of Trade and Industry in an effort to get the legislation changed around the widespread waivers of liability in consumer contracts.

Lyons says the waivers are weighted heavily against the consumer.

He says another example is hospital contracts.

“A patient entering a private hospital has to sign a form waiving his or her rights against the hospital for any injury or damage of “whatsoever nature that the patient may sustain or suffer as a result of his/her/their presence in or treatment received and arising out of any cause of whatsoever nature including but not limited to negligence and however arising.”

He says the same goes for some security companies, according to their client contracts.

“They could come onto your property and steal you blind and you won’t be able to sue for damages because you signed their contract with its waiver of liability.”

Lyons believes its time for the law to change.

“Legally, if you freely contract you’ve had it. Even if you can prove gross negligence or misconduct.”

Ross Faragher- Thomas, Virgin Active general manager of operations, said it was standard practice to include disclaimer clauses in contracts in order for one contracting party to exclude liability towards another contracting party for injury, loss or damage.

He said Virgin Active had adequate public liability insurance in place to cover itself against claims for damages.

“In terms of the cover afforded our contract has to include a disclaimer clause.”

Faragher- Thomas said that their underwriters in consultation with their attorneys drafted the clause.

He said it was consistent with current case law and legislation.

“We do not attempt to mislead our members as to the content or the nature of the disclaimer clause.
Express reference is made to our disclaimer clause on the front side of our agreement and the clause itself is printed in bold letters.” 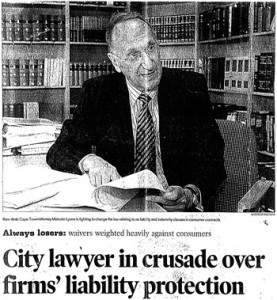