Cape Town’s lucrative extreme sports industry  has been thrown into confusion, after a
Western Cape High Court  judge declared on Friday that tandem  paragliding “for commercial
gain” is unlawful, unless a commercial pilot’s licence is obtained.

The city has been described as a paragliding hot spot, with a single operator which launches  from Lions Head and Signal Hill  reporting taking  up to 5000 people on flights every year.

The  judgment by Judge Pat Gamble, was in a multi- million rand damages action instituted against  the SA Civil Aviation  Authority(CAA)  and the South African  Hang and Paragliding Association (SAHPA)  after UK  tourist Diane  Berwick was  paralysed  in a paragliding  crash in Hermanus
in 2004.

The  crux of  Berwick’s case was that  tandem paragliding was unlawful  at the time-and on Friday  Judge Gamble  agreed, but  went  further  to  say that “any service operated by means
of an aircraft  for reward” was unlawful unless a licence, in terms of the Air Services Act, was obtained.

Arguments in court  were that the Commissioner of Civil Aviation exempted  commercial  tandem paragliding  operators  from the provisions  of the act, so that they  did not  need licences. But Berwick’s lawyers countered that the commissioner did not have the power to do so.

One  operator  Manu Wegmershau, who owns Cape Town Tandem Paragliding, which  was not linked to the  legal action,  said his company  had never  experienced problems obtaining commercial licences, and that they  kept up –to- date  with  developments and legal protocol.
He explained to Weekend  Argus that  each tandem  pilot  must have a minimum of  five  years’ flying experience and a perfect safety  record.

“And it’s not enough to just be experienced, their character is very important too as there is no room for cowboys on the mountain,” he added. Other operators referred queries to SAHPA.

Anthony Allen, paragliding steering committee chairman, said they would comment only after they had examined the ruling.

Berwick, who claimed  R20 million in damages, said in her papers that weather conditions at the time of her crash made it unsafe to fly.

She alleged that the CAA  and SAHPA were  obliged to  reduce the  risk, and should have been  aware that paragliding instructor  Robert De Villiers-Roux and the businesses were regularly  conducting paragliding flights for commercial gain.

Judge Gamble said the Air Services Act showed that the requirements for the issue of applicable licences were “extensive and complex”.

The  room for “an exception from the  provisions of the Air Services Act is extremely limited, and will only be considered if the applicant for exemption wishes to operate an air service “on a non- profit basis for purposes incidental to social welfare, or for purposes of salvage  on  humanitarian  grounds, or where  the granting of the exception will assist in  saving life.”

Tandem paragliding for reward, he said, clearly did not fall into those categories.

He commented that the SAHPA and the CAA, “now know what they have to do, and how they need to conduct their affairs…”

I have little doubt that, as responsible bodies, they will ensure that no further harm is caused  to  unsuspecting commercial paragliding passengers, “ Judge Gamble said.

He found the CAAand SAHPA liable for Berwick’s damages. The sum of damages has still to be determined.

Tzvi Brivik, for Berwick, said as things stood “tandem paragliding would be considered unlawful without a valid commercial pilots licence”. 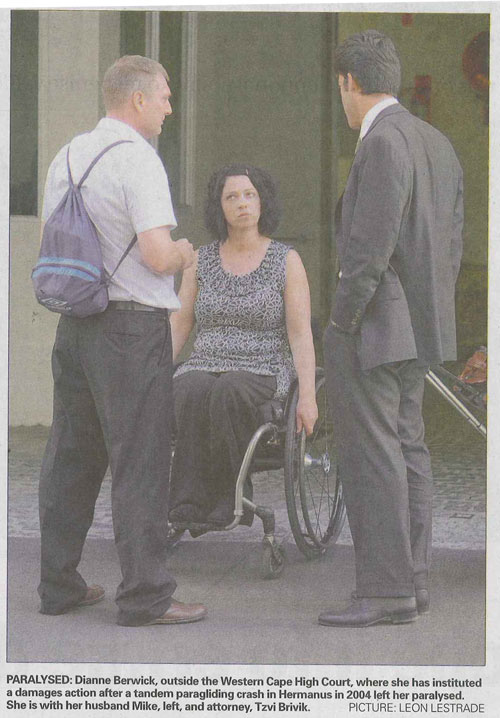