Home/Teenager Mauled After Trying To Kiss Caged Lion
Previous Next

A Canadian teen got a little too close for comfort to a lion she was helping
care for in a Limpopo rehabilitation facility, when the beast tried to drag her
into its cage by her legs.

Lauren Fagen, 18, was volunteering at the Moholoholo Wildlife Rehabilitation
Centre when she leaned in to kiss the beast’s fur.

The Montreal girl was then pulled into the animal’s cage, where the lion  an
its mate gnawed at and gashed  her legs before she was eventually
dragged away by a life-saving fellow volunteer.

Fagen had been all set to attend McGill University in a few months  and
wanted to indulge a life – long passion for animals, working with the animals
at Moholoholo, a centre established in 1991 for  the rehabilitation of animals
like rhinos and honey badgers.

Moholoholo houses injured and poisoned animals that can no longer live in
the wild.

Fagen’s job had been to clean cages. Only trained professionals  are
allowed to feed the lions.

But Fagen wasn’t feeding five year old Duma, a male, when attacked; she
was leaning in to kiss its fur, reports the Canadian Globe  and Mail.

“I didn’t realise he could stick his paws through, “ Fagen said of the
powerful feline.

The lion grabbed her and dragged her legs into the cage, where  he
began tearing at them. Its mate joined in, pouncing on the  girl’s feet.

“I should have died or lost a leg. It was a miracle that I survived,” she said .

Fagen said the big cat was being “very very friendly” before the attack ,
hinting that she may have been lulled into a false sense of safety.

And she told ABC News via Skype from a Pretoria hospital that she still thinks
the lion meant no real harm to her.

One, a veterinary nurse from Britain, managed to beat the lion and lioness off
of  Fagen with a broom.

“Both her knees were  injured and she had puncture wounds in the calf
and  huge gouges out of her thigh,” said 24 year – old lifesaver Natalie
Bennett.

“She’ll  have some scarring on her legs, but there  won’t be any permanent damage,”
a  manager of the Wildlife centre, Marisa Reinach, told the Globe and Mail.

Fagen said her love of animals was undimmed. She said she had signed  a
waiver when she arrived at the centre, and had known the risks.

It was the first attack at the 20 year –old centre, according to Moholoholo
founder Brian Jones, who said things could have been much worse.

“This is a quite mild – it’s a  miracle it wasn’t worse ,” he said.
“ She came here telling people that she wanted to hug an animal.”- Daily Mail. 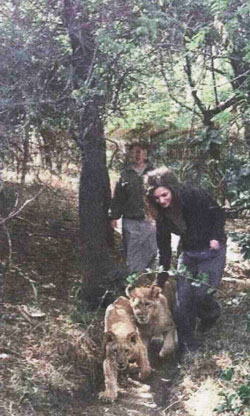