According to Tony Brown, spokesman for the T- Mobile team while they are training in South Africa for the Tour de France , a car driven by a man aged about 65 years, with a woman passenger of about the same age, drove past Hondo and a cycling partner on the Paarl Vallei Road.

Brown said the man had shouted at the two cyclists. He added: “They just ignored him; cyclists are used to this type of macho behaviour.”

The driver then braked and the cyclists passed the car. “The car then forcibly and with intent drove into Hondo’s bike,” alleged Brown, who accompanied Hondo to Vergelegen Hospital.

Hondo said he was not sure when he would be cycling again. “The doctors will have to check me out. Sometimes you get internal injuries from a fall like that,” he said. “I’m not so worried about crashing, you can crash in any country. The problem is the drivers can do this.”

Hondo said that , after his fall, his cycling partner had thrown his bicycle at the driver . This was “to protect the cyclist lying in the road”, added Brown. The driver then drove away.

He said the back of Hondo’s bike made of strong carbon fibre, and worth R40 000, was smashed.

After an initial check- up at the hospital, Hondo returned to his guest lodge. He is to be seen by specialists today.

According to Somerset West police, the driver of the vehicle called the police station after the incident and said the cyclists had attacked him. He left his name and number. Hondo laid a complaint at the police station late yesterday afternoon.

Brown said Ullrich and his T- Mobile team had come to Somerset West to train for the past eight years. “I took out adverts in the local newspaper letting people know they are here and asking drivers to be cautious,” said Brown.

He said the team had decided to take action against the driver because he had driven away. “Usually the guys have cars behind them with ‘caution cyclists’ signs. These two went off for 20 minutes on their own and look what happened.”

In June last year Hondo was barred from racing for two years for doping offences by the Swiss cycling authority, Swiss Olympic, and the Lausanne court.

Last month he tried to have the ban annulled so he could race this year, but the Court of Arbitration for Sport upheld Swiss Olympic’s decision. 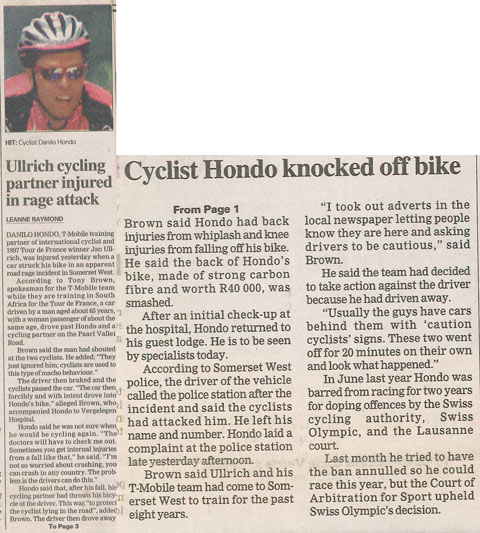