Home/Survivors of Fatal Crash Win Their Damages Case
Previous Next

Almost eight years after a train crash near Faure in which 19 farm workers were killed, two survivors have won a test case  in their bid for damages.

Their victory comes on appeal  after the case  was dismissed  by the Western Cape  High Court in  July  last year.

Primilda Jacobs and  Caroline Hendricks, whose cases  were  consolidated, then took  the  matter to the  Supreme Court of  Appeal (SCA), which  has now found in their  favour  on  the  merits.

In a Judgment that described  the  incident as “the worst of its  kind in this country”, Judge Stevan Majiedt  found that the  respondents – cited as the  Metro Rail and  the SA Rail  Commuter Corporation – had  failed to  implement  reasonable  measures  to  prevent harm .

Judge Majiedt said the harm of the train colliding with a vehicle  at the  “uncontrolled  , minimally protected” level crossing  was  reasonably foreseeable . “The respondents  failed to  take adequate  reasonable  steps  to  prevent  the  materialization  of the  harm,  namely  by  reducing  the  speed  restriction  to  40km/h on that  part of the  railway line…” the  judgment  read.

The matter  of  Jacobs  and Hendricks  is considered  to be  a test case  for a number of other pending  damages claims arising  from the  incident.

Jacob’s  attorney, Ighsaan Sadien, said  the  judgment  could now  be used  in the claims  of those  who had instituted proceedings .

Attorney Tzvi Brivik, for  Hendricks, said the other claimants were, broadly  speaking, divided into  two  groups-  those who had suffered  personal  injury and   those who were claiming  loss of support  after losing a  breadwinner. 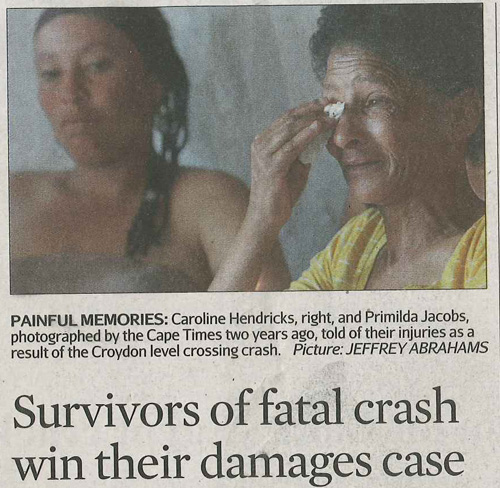