Home/Accident Victim to Sue Attorney for R2 million
Previous Next

She was three years old when the Valiant she had been travelling in collided with a Toyota in Khayelitsha on January 30, 1988, rendering her wheelchair-bound for the rest of her life.

Her mother sued the vehicle insurers for damages and the claim was settled at a time when she was a minor.

Several years later, however, Babalwa Kweyiya discovered that the settlement was a mere R99 500. She claims that she was entitled to more than R2 million.

She sued Sea Point attorney Charles Robert Macleod, alleging in papers that he was negligent and in breach of contract. And, while he countered her claim had prescribed, the Supreme Court of Appeal (SCA) has found that it hasn’t – affectively giving her the go-ahead to sue Macleod. And, according to her attorney, Tzvi Brivik, that’s precisely what Kweyiya plans to do.

In the SCA judgement, handed down on March 27, it emerged that Macleod issued summons against the insurers in the Western Cape High Court in 1993, while Kweyiya was still a minor, after her mother, Cynthia, instructed him to do so. The insurers on the Valiant paid out R25 000 and, in terms of a partial settlement in 1996, the insurers of the Toyota agreed to pay our 35 percent of the amount of damages they could prove in court. Kweyiya’s mother wanted R2.3m.

However months later, she agreed to settle for a mere R99 500 – a miniscule amount compared with what was initially claimed. At the time, Kweyiya was eight years old. Of that amount, the mother received a cash payment of R14 000, while the balance went towards disbursements and a house in Khayelitsha.

Several years later, Kweyiya and her mother were involved in a dispute over the house and she went to Macleod for advice, but was told there was no amount payable to her and that she should go to the Legal Aid Board. It was then, for the first time, that she discovered the terms of the settlement.

In 2009, she sued Macleod, alleging that he had acted negligently. And, while he alleged that her claim had prescribed, it was Kweyiya’s argument that she only became aware of the details of the settlement in 2006 and that she issued summons within three years of that date.

In April 2012 the Western Cape High Court ruled that the claim had not prescribed. But, determined to fight the litigation, Macleod appealed. The SCA, however, found that it was “perfectly innocent and reasonable” for Kweyiya, as a minor, to trust that her mother and Macleod had acted in her best interests.

Judge Zukisa Tshiqi wrote that Kweyiya went to Macleod’s offices because she had a dispute with her mother pertaining to the occupancy of the house which had been bought with some of the money that had been received as the settlement amount. “The visit did not concern the details of the settlement amount. There is no suggestion that at that stage she was concerned about the quantum at all. The version of the appellant confirms that there was no discussion pertaining to the quantum of the claim, the cost of the house and the amount given to her mother. There is no basis to conclude that she should have appreciated that there was something wrong with the quantum of the claim, nor with any other aspect of the claim at that stage. More importantly, there is no basis to conclude that she must have realise that there was an under-recovery nor that there was a possible claim for negligence against (Macleod). She probably believed, innocently, that the settlement amount was the best under the circumstances,” she added.

She found there was also no reason why that belief would change merely because she had attained majority.

The appeal was dismissed.

Speaking to Weekend Argus after the judgement was handed down, Brivik said: “On investigation we discovered that about R100 000 which she received could not possibly be a fair estimate of her damages. She was rendered paraplegic, paralysed from the waist down and since four years of age has been confined to a wheelchair existence.”

He added that his firm would ensure that she would receive a sufficient amount so that she could afford wheelchairs and assistive devices, and pay for ongoing treatment and professional help for the rest of her life.

“Twenty-three years after the accident Babalwa is happy that as a result of this litigation her needs will now be met,” he said. 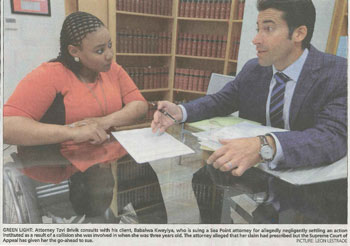 Need help as an employer or employee to claim from the COVID-19 relief scheme?